I am the spawn of two USAF Veterans. My father, Tex, has a penchant for airplanes. Specifically, the F-111, also known as 'The Aardvark', because of it's long, pointy nose (sexy, huh?). He worked very closely with them while we were stationed at the RAF Upper Heyford airbase in the UK during the early 1970's.

So, for Father's Day for the last few years, I've tried to find local airshows that we can attend together to get him his fix (and apparently, I got the gene too - I am enthralled from beginning to end). Willow Grove Naval Air Station put on one of the best shows in the region, but the base has been scheduled to close, and has since stopped hosting one. Luckily, we're blessed by living in a fairly central location, and there are several excellent exhibitions each year (nice alliteration, if I must say so). This year, Tex wanted to check out the Open House at Dover AFB in Dover, Delaware. On Father's Day, we trekked on down for the show.

We got there early to get good seats and to check out the static displays. Dover AFB is, in addition to being an active USAF base, also the home to the Air Mobility Command Museum. They had a lot of different aircraft on display, some restored and some just as they were when they were retired. A few that we had the pleasure of meeting: 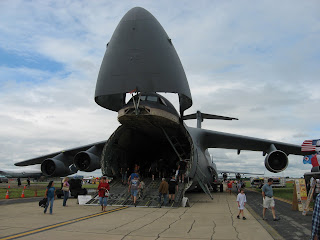 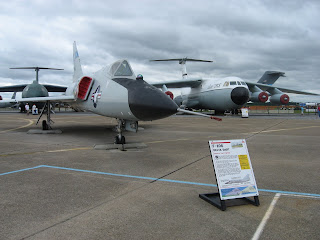 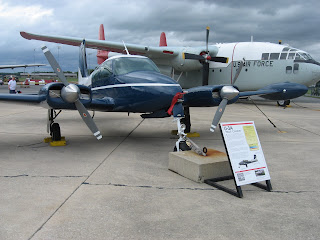 And there he is. Tex. Dad. I know he doesn't look it, but he's absolutely loving all this. 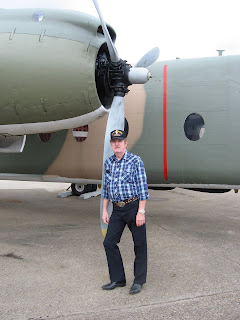 To coax a smile out of him, I sprung for one of his favorites; an A&W root beer float. 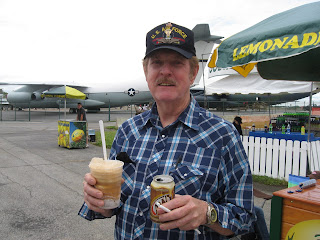 It got close to start time, so we took our seats. We managed to stake our claim next to the media platform, which was right at show center, and we were at the fence line. 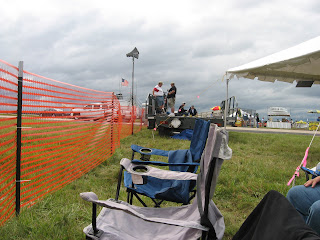 The show was opened by the AFA Wings of Blue Parachute Team: 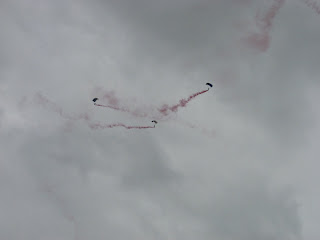 The wind was kicking up and it was obviously a lot of work for them to maneuver and land near the target. These guys are terrific, they made me want to go jump out of a helicopter immediately.

There was a jet car - the Air Force Reserve Jet Car. It's a drag race - looking vehicle that has a Westinghouse J34-48 jet engine mounted on the back, with afterburners and everything. I believe they clocked it at 314 mph on its' pass. On the jet car website , it states that the jet car can reach a speed of 400 mph in 8 seconds. If they let it go any longer or faster, it would want to fly, and they like keeping it on the ground. 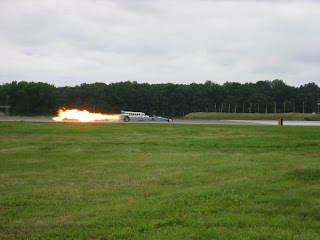 This next guy is Matt Chapman, from the Embry-Riddle Aeronautical University. I've seen him before and I have to say, this guy is AMAZING. Matt will fly his little plane straight up, until he runs out of airspeed; then he falls backward and flips the plane back over and zooms back to earth. He's also able to flip it end over end a few times up there; the whole time, you're holding your breath - hoping that he makes it through. 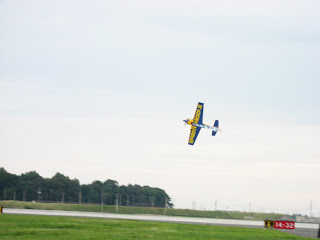 Apparently, the night before, Matt challenged the jet car guy to a race. I know in this picture it looks like Matt is winning, but as soon as I snapped it, the jet car shot forward and absolutely SMOKED Matt and his plane. The DE State Trooper they had present clocked the jet car at 341 mph. 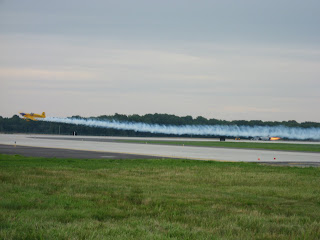 There were a lot of WWII era fighters and bombers flying as well. It was a real treat to watch them and envision what it must have been like, not only for the pilots, but the enemy who went up against them. En masse, these suckers are loud and intimidating. 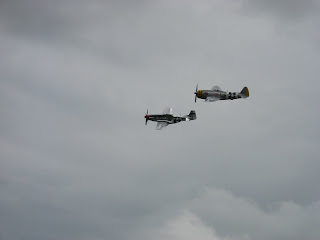 I belive this next one is an F-16 (Tex has the program, I'll check and if it's not, I'll correct). The pilot showed off all of it's features, he zoomed us a few times, dropped his tailhook to make like he was going to land on a carrier and generally showed it off to its' utmost ability. 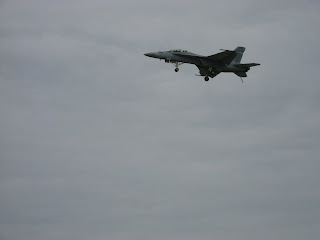 There was a legacy flight also, where the F-16 flew along with it's older counterpart. It was really cool to see how far we've come. 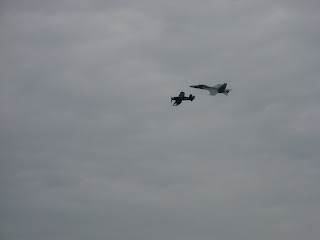 They demonstrated some of the large transport aircraft as well. These planes are HUGE. One of them even has 5 sets of landing gear. 5! Suprisingly, they are really maneuverable. It was impressive to watch them perform short take-offs and landings, as well as to see how agile they were once in the air. They need to be, as they routinely fly into and out of hostile zones. 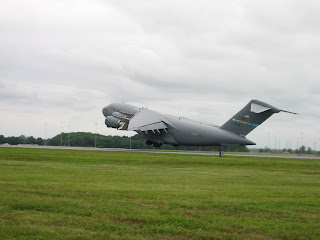 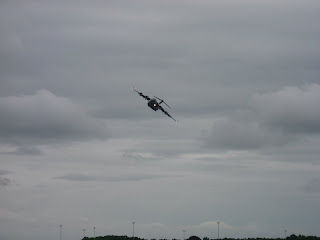 Back to the aerobatics! Which, we all know, is really where it's at.

This is Herb and Ditto (Herb is the pilot, Ditto is the plane). See the smoke coming off of Ditto's wings? Herb designed these special smoke thingies (I have no idea what they are called) that cause the smoke to clip itself into rings, which he then flies through. 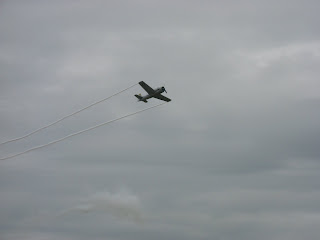 Here he is hitting a bullseye. It was actually so windy out that the rings were having trouble forming, but man, he did his best. 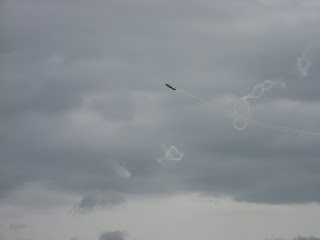 Matt Younkin was up next. His plane was painted black and red - it looked just like the Red Baron. 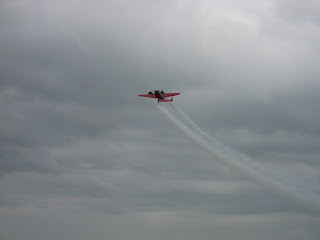 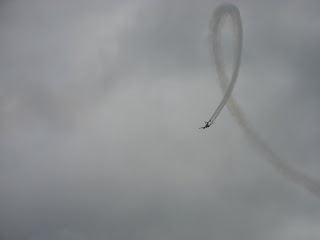 The Aeroshell Aerobatic team, which I had never seen before, were fantastic. It's breathtaking to watch these pilots fly in such close proximity to one another, and to make it look easy and graceful. And they're talking to the crowd the whole time. Most of the pilots had a direct link to the announcer, who would chat with them while they flew. We could hear it all. They were having a great time up there. I don't know how they could do that while flying upside down and zooming straight down to the ground. These are some talented guys (and girls). 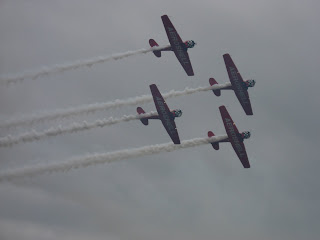 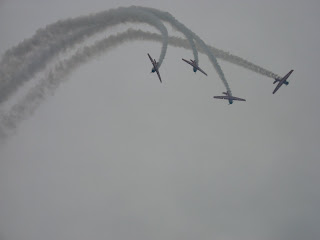 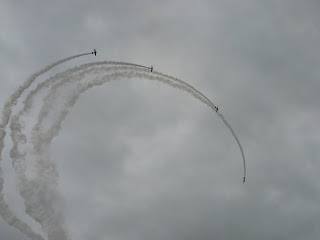 After they landed, the four planes lined up on the runway, facing the crowd. They all hit the gas while holding the brakes and burned rubber for a minute or so. Then the pilots got out and stood on their wings, but the smoke was so thick that we could barely make them out. 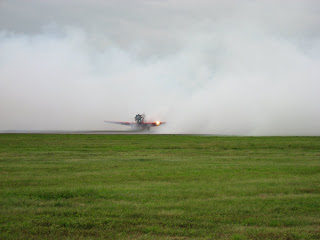 I (and the folks at the Open House) saved the best for last.

The USAF Thunderbirds were the finale. I've seen them several times before, and they never fail to impress. All day had been overcast and gloomy, but right before they took off, the skies cleared up and it was all blue and sunny and perfect. Clearly, Mother Nature is a fan of theirs. 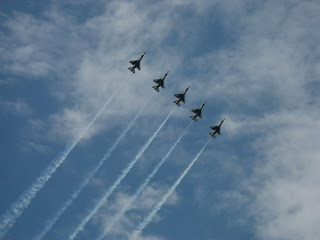 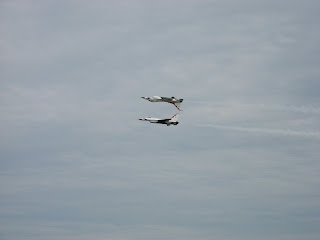 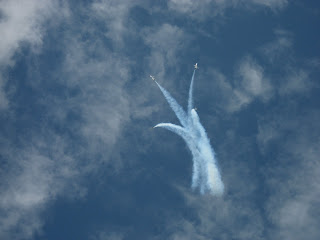 They ended the show beautifully.

Since it had rained for the 40 days and 40 nights (it felt like it) leading up to the Open House, parking in the field across from the base was impossible. Instead, they arranged to shuttle folks back and forth from the parking lot at the local mall. Which is fine before the show starts. Once it's over, everyone wants out. The line was ridiculous. 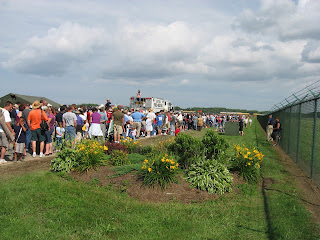 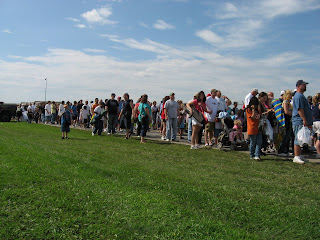 But since Tex and I had our chairs, we just parked ourselves on the side grass and waited till the end of the line came, then we moved ourselves down with the end until we could get on a bus. 2 hours later. 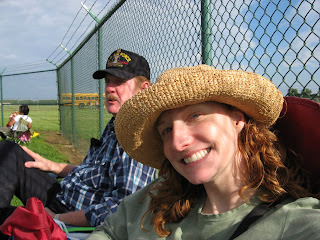 There we are. This was about 1.5 hours in. I'm still smiling (Tex is too - believe it or not), so that's a good thing. But wait, what was that in the picture up there? Was it a - 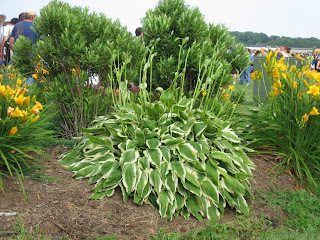 Hey! There's a hosta in that flower bed! How about that? I can't escape them, no matter where I go. :)

I hope all the Dads out there had a Happy Father's Day. We're heading down to the Thunder Over the Boardwalk show in Altantic City in August, so you'll get to see more planes. Before that, though, we'll get back to the serious business of hostas, and maybe a little drive-in movie fun.

Posted by The Hosta Chronicles at 8:22 PM