A little over a month ago, I, along with my work-husband - The Rocket Scientist, went on a quest to locate the MacGuffin. Finding it and following the instructions that it was broadcasting would gain us entry into a secret society. A secret society that revolves around movies. Specifically, 16mm movies shown in secret locations, projected from a sidecar attached to a 1977 BMW motorcycle. And you get a way cool Nerd Merit Badge for finding the MacGuffin too! How could you NOT want to be a part of it?!

We found the MacGuffin, got our member #'s and waited for the next instructions. Unfortunately, neither I nor The Rocket Scientist could make it to the first GDI (Guerilla Drive-In) that we were eligible for; it was Ghostbusters, shown at Fort Mifflin - which is rumored to be haunted. Bummer for us.
So we set our sights on the next movie. Turned out that we were in for a real treat. Back to the Future was scheduled to be shown on the roof of the Bicentennial Garage in downtown West Chester. The location was perfect because there is a clear view from the roof of the parking lot to the clock tower on top of the courthouse. It would be just to the side of where the screen would be located. AND, the DeLorean Mid-Atlantic Club would be bringing a bunch of DeLoreans to exhibit. How cool is that?
On the appointed evening, GeekBoy and I (The Rocket Scientist would be along later) hauled ourselves up to the roof of the parking garage. There were already quite a few people there, and also 6 (or was it 8) DeLoreans on display.
(all of these pictures were taken with my iPhone, so please forgive the somewhat poor quality) 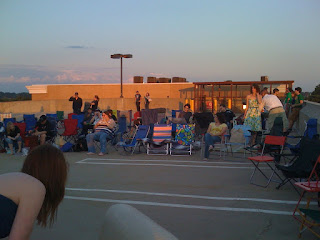 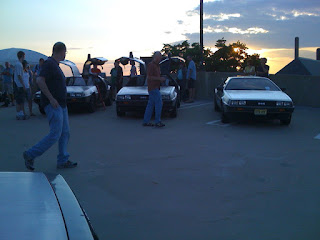 Here's GeekBoy with one of the DeLoreans. He was really enjoying being around his own kind of people. 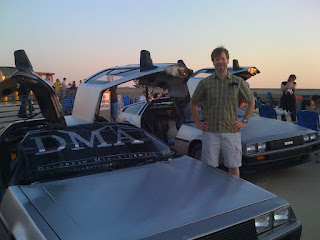 There was one guy who TOTALLY tricked out his DeLorean to look like Doc Brown's in the movie. It was awesome. 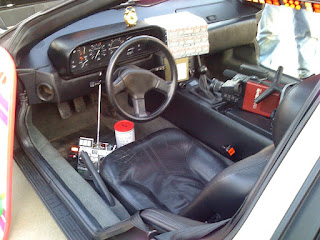 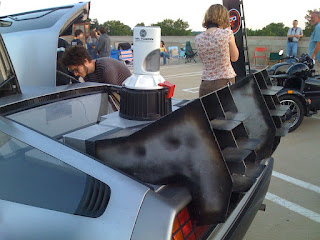 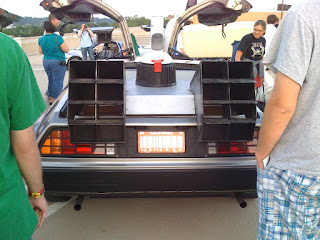 The motorcycle that the projector will be mounted on: 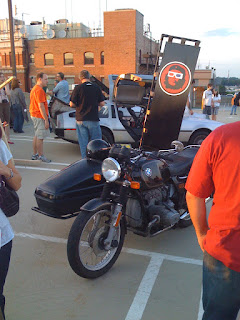 There was a costume contest too (here you can see the clocktower off to the right): 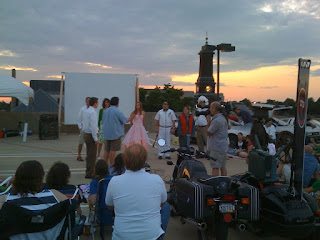 There was a news crew there as well. They filmed a bunch of the preparations, interviewed the organizer and talked to attendees throughout the night. It was very exciting to be in the middle of it all.
The Rocket Scientist finally showed up: 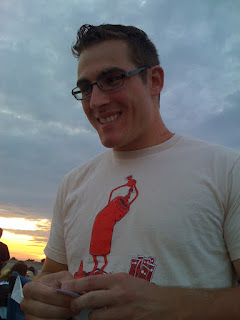 And so the show began: 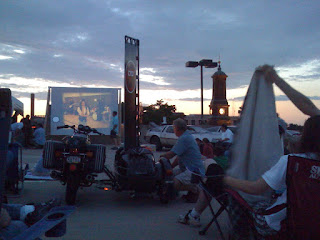 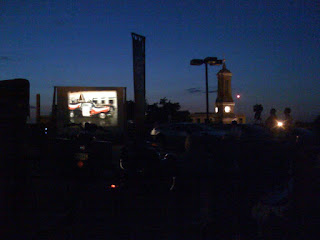 It was fabulous. There were some technical difficulties with the sound at the beginning, but they were quickly sorted out. We had such a great time - I've never done anything like it before and now I can't wait for the next one. The people were great, the location was excellent, it was a picture perfect night weather-wise, and the movie was just as good as the first time I saw it.
If you've got one of these groups in your area, I highly recommend becoming a part of it.
Posted by The Hosta Chronicles at 10:39 AM