We're heading back to the Spring of this year now. (I never know whether to capitalize it or not - so I'll switch it up at my discretion) This past Fall, we decided to leave the last of the leaves on the ground out front, after I saw a film at the Academy of Natural Sciences about oak trees. In the film (which was wonderful) the narrator explained that oak leaves contain all sorts of nutrients vital to the trees' health. Once they fall to the ground they start to decompose and the earth absorbs all the composting goodies, which help to feed the tree over the winter. 'Great', I thought, 'I'm KILLING the trees when I get rid of the dead leaves!' I absolutely adore our trees and when any of them die and need removed, I feel like I've failed them somehow. Except for the one that got hit by lightning. That wasn't my fault. However, now when there's a thunderstorm, I hope and pray that none of them get hit. It's very stressful for me - I am well aware that I have issues.
An aside: did you know that the wood from oak trees struck by lightning is used to make magic wands? I had no idea. GeekBoy told me. The landlord at his last apartment (he lived over the garage) was a Wiccan wizard (should I capitalize 'wizard'?), whose property was named 'Rivendell'. When we had that particular tree taken down, we offered him some of the wood. Apparently, he already had a stash and didn't need any more. I think I would like a magic wand though. I wonder if you have to be a wizard to make them work, or if I could use it to get the cats to scoop their own boxes. Anyway, back to the spring.
So we left the last of the leaves to rot on the ground and keep the trees happy. We don't just have oak trees; we have red, white and chestnut oaks, tulip poplars, ash, elm, hickory and some mitten-leaved trees. And a walnut too, I think. Hopefully they all like their own leaves. This seemed to work pretty well, and wasn't too much of a pain when it was time to start clearing them out so the plants could get some light.
All of these photos you're about to see were taken in April of this year.
Here's the front, see the nice rock border? It's not so ugly, now that the advancing mesa of leaves is gone. 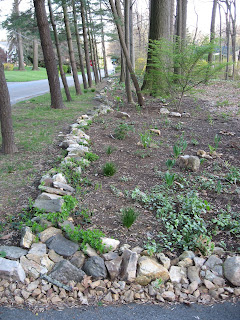 I call this spot 'the peninsula' because it, well, sticks out like a peninsula. All that green stuff behind the trees is that lily-of-the-valley I was talking about before. I added the tulips and hyacinths last year, to try and get some color going before the trees leafed out. 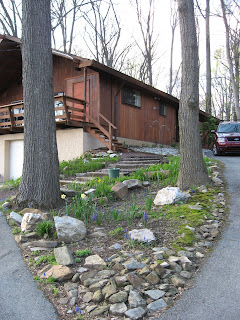 And here it is from the top: 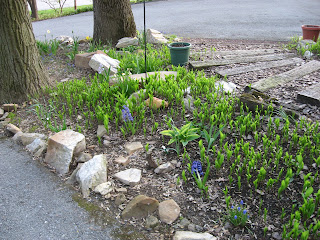 The birdbath garden (yes, we have a gargoyle): 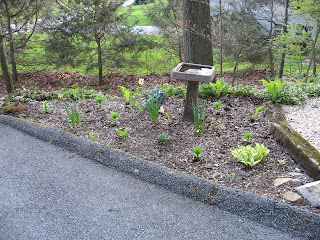 This is the side yard, where we uncovered the flower bed with the rock border during the 'Great Clean-Up of 2007': 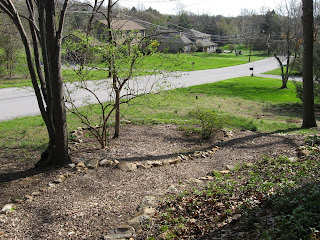 (Please ignore the weed lawn, we're working on it. At least it's mostly green)

And finally, my hosta beds. This is where I'm putting most of my new acquisitions. It's sort of a testing area. Once they mature and begin to spread, I'll harvest some and plant the offspring elsewhere on the property. GeekBoy is due to dig me a third one over in this area this summer.
On the left: 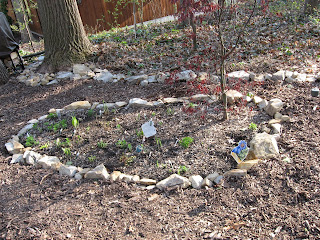 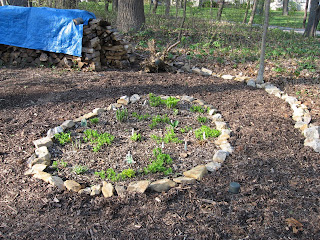 So there you have it, where we started this Spring. It's come a long way in the last 2 months. I'll be posting more recent photos soon; but first there will be a review of a new spirit (of the alcoholic variety - not the supernatural type) that GeekBoy found, and a post recapping Father's Day spent with Tex. It's not always all about hostas, but it's all good.
Posted by The Hosta Chronicles at 2:08 PM

Labels: in the beginning, Spring 2009