The Agony of Defeat

There used to be a show on ABC (on the weekends, I think) when I was a kid called The Wide World of Sports. The opening footage rolled though 'the thrill of victory' - with an athlete winning something big, and then switched to this ski jumper wiping out horrifically and the voiceover moving to 'the agony of defeat'. Every week I (and countless others) watched as that poor guy's (who's name is Vinko Bogataj) worst moment, probably ever, was replayed over and over and over again.

I've found the video on You Tube, in case you're interested, it's below.

Last Sunday, I got to experience my very own 'agony of defeat' moment.

28 miles in to a 35 mile bike ride, I wiped out going around a downhill curve at about 30 mph. There was no video, unfortunately. I did have a witness, however; the IT Guy from work that I was riding with. He advises that I flipped over a few times landing on my head and right side, and eventually coming to rest on my back.

Before I went down, when I knew I was going to eat it; I managed to get myself over to the grass on the side of the road and as such, avoided any sort of road rash or nasty cuts. I did manage to acquire a black(-ish) eye and nose as well as assorted bumps and bruises on my person and a (I think) dislocated shoulder (when I was being examined in the ER - I should sue that ER doc! But he WAS very cute). I cracked my helmet and broke my sunglasses (heartbreak!).

The bike is OK - it's currently at my LBS* getting checked out, but upon a cursory inspection by one of their guys, seems to be fine. I chalk this up to my having had a number of nasty crashes before, and learning the hard way how to fall off of a bike (let go of the bike, do not put your hands or arms out to brace yourself, and go limp). But, because I was primarily a mountain biker, I never fell at that speed. Let me tell you something - it HURTS, a LOT. I don't know how the Tour de France riders get back up and keep riding after those pile-ups they get into - dude, they're going 60 miles and hour and they rack out onto asphalt. THE HORROR.

Back to me. I'm doing pretty good. My face is healing and the bruises are fading. I'm still a little sore, but nothing I can't handle. My only ongoing problem is my right arm. I've got an appt. with my Dr. this afternoon to see if I need an MRI on it or what. Keeping my fingers crossed that it doesn't need anything major. Do me a favor and keep yours crossed for me too.

A couple of photos for your viewing pleasure:

The IT Guy and I at the start of the ride. 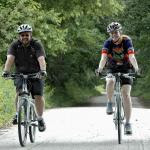 And me, right after the crash, once he'd made sure I wasn't in any imminent danger and had called for a SAG wagon to come pick up my sorry ass.

Note where my bike landed in relation to where I eventually came to rest - letting go of the bike when you're going down is so important. You do not want to fall onto your bike, if you can at all help it. They are hard and sharp and pointy. These attributes do not mix well with fleshy people bits.

Also - helmet, helmet, HELMET. This I can not stress enough. It doesn't matter if you are just going for a spin around the block or on a full blown century ride. I don't care how dorky you think they are or how they make you look. You will look a whole lot more dorky in the coffin after the mortician has done his best at putting your head back together, if he even can. This is the second time that a bike helmet has saved my noggin in a crash. My helmet cracked the entire way through this time - and I landed on GRASS, not the road. You do not want to experience your skull slamming, unprotected, onto any surface, trust me. You know what a watermelon does when it's thrown on the ground? That's exactly what a human head will do.

Not a pretty picture, huh?

I was very, very lucky - this could have been a lot worse.

So there you have it. I'm just bummed that I don't have the video - if I did, I would submit it to one of these weekend sports-type shows to use for their 'agony of defeat' segment.

And then I could be famous.


*LBS - Local Bike Shop. Do these guys a solid and throw them your bike business. You will have a much better experience with them than at the big-box bike stores.

Posted by The Hosta Chronicles at 8:15 AM No comments:

A lone PSA and a bit of groveling.

While I haven't been here, I've been indulging myself in a bit of a liquid diet and a looky-loo up the old pooper, with pictures and everything. Faboo. You're so jealous.

For those of you not in the know (and those who haven't had the pleasure), yes; I had a COLONOSCOPY on Friday.

And I highly recommend.

Why? Well not only is the anaesthesia fantastic, but hey, I'm OK. Completely normal and nothing to worry about. I was in and out in just about 2 hours and back to wandering the house, bothering the kittehs pretty much as soon as I got home.

A COLONOSCOPY is NO BIG DEAL. And I am living proof of that.

I don't have too much to report on the procedure itself, because I was out for it. This is the beauty of it - you don't even know what's happening. What could be nicer? I felt fine after - just a little crampy, but that went away in a few hours. Other than the cramps - nothing. Not. A. Thing.

Aside from the non-red/purple liquid diet I suffered through on Thursday (all the lemon Jell-o and chicken broth I could choke down) and the kind of yucky-tasting prep stuff and associated bathroom activity, it just wasn't that bad. Really, the worst part is the prep.

You have to take 2 pills and then 2 hours later you start drinking the roto-rooter concoction. Hey it looks just like water! Because you've mixed a gallon of water into the powder in the container. But it's not water, not even close. It's weird and kind of salty and thick and the flavor packets don't do shit to improve upon it much, even though I mixed in both the cherry and the lime ones. Truthfully, even the disgusting prep liquid isn't that awful - except for the fact that you have to drink the gallon in 8 ounce increments over the course of 2 hours. You get full, fast. Really, strangely full. It was a weird feeling, and the paper they gave me was right - keep moving around and it won't be so bad. (I did laundry and walked around the house grouching, while GeekBoy had a massage - he has it so tough)

However, once the 'activity' starts, it's constant. But you do feel a lot better. And bonus - I lost 3 pounds from Wednesday to Friday morning*. Of course I gained it all back over the weekend when I felt that since I'd subjected myself to this perceived atrocity, that I was on the all-I-could-eat meal plan. We'll see tomorrow when it's my official WW weigh-in day.

Anyway - what I'm trying to say is that if you've got some issues and you're afraid or you're of the age and you haven't had one of these (yes mom, I am looking right at YOU) - just do it. Please. As the commercial says, it's a lot easier to have the procedure than it is to have to tell your family and friends that you have terminal colon cancer and it all could have been avoided if you'd only had the freaking colonoscopy. An old boss of mine, his mother-in-law died (on Christmas Day) of ovarian and uterine cancer. Because she NEVER had a pap smear or gyno check, she felt it was too invasive. I wonder how much MORE invasive the unsuccesful treatment for the cancer wound up being.

Don't be like her. Get your works inspected. Be on the safe side. JUST DO IT.

Onto the semi-related groveling portion. The Cancer Ride (technically the ACS Bike-A-Thon Philadelphia) is coming up in July and I'm all registered and whatnot. So, good people, if you are able, consider making a donation to the ACS in support of my pedaling 66.1 miles in the sweltering July heat. We all know someone who currently suffers from or has passed away from this terrible disease. If you are so inclined, the link to my page is here. Anything is appreciated, and as I've stated before, the donations are what keeps me going once I'm out there. It would be way easy to stop after 20 miles and hop on one of the sag wagons, but when people put up their hard earned coin in support of me and my bike - I gotta finish. For them, and for those folks who are sick and would give ANYTHING to be able to just hop on a bike and go. How lucky am I that I don't have limitations like that right now? So, please, every little bit helps.

Of course I will be bringing my tale of this year's ride back to you in picture format. I may even have a couple of new faces to add to mine and the Rocket Scientist's. Currently I am recruiting the IT Guy and the BeanCounter to join us this year. Keep your fingers crossed for me. The more people I can get to suffer alongside me, the merrier.

So there you have it. Shit talk and begging all in one convenient, easy to swallow post. I'm nothing if not efficient.

And I thank you for your support.

*This is why they make the prep gross. People would be using it as a quick weight-loss tonic if it were actually pleasant.
Posted by The Hosta Chronicles at 11:29 AM 1 comment: