And the Lord said: 'Some places are going to have more shade than others....'

I only came to be enamored with the genus Hosta when GeekBoy and I bought our house a little over 2 years ago, and it happened to be on a wooded lot. I had little to no interest in them until then - they were 'those lettuce plant things' that my mom had growing in her garden, and they had been there since before my parents bought the house in 1974. Now I have some of her 'heirloom' hostas growing in my garden. It's one of the nice things about them - they multiply, some of them like rabbits. I remember my mom telling me that she couldn't understand why people would ever pay for them at a nursery - why, when they keep making more themselves? Well, because there are over 4000 species and cultivars, that's why. Also, those of us with the 'HostaAddict' gene just can't help ourselves. I figure, though, that it's a more socially acceptable (although not necessarily cheaper) addiction than crack.
We settled on our house in February, when it was cold and bleak and snowing. The property had not been maintained very well by the previous owners during the 20 years they owned it, but we didn't know this - as everything was dead or dormant, and the day we moved in - covered in snow and a thick layer of ice. I'm not sure what I expected would start poking up in the Spring, I was too busy being excited that there was no lawn to mow. No grass! No summer days spent mowing an acre of property! I think I have a few pictures from the day we had the place inspected: 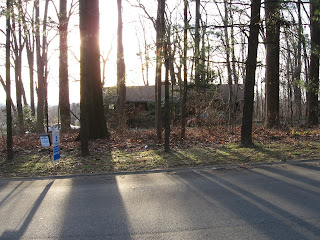 Here it is from the street. I'm not sure what I thought was going to happen when everything grew in and unfortunately, I didn't take any pictures of it in the spring, before we went to work. 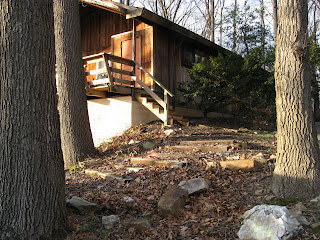 As you can see, there's a lot of leaves. A whole freaking lot of leaves. Apparently, they come with the trees. Again, all I could think about was 'NO LAWN TO MOW'. See that bed, the one with the leaves and rocks in it? It's filled with Lily-of-the-Valley. Who knew? When they started coming up - I had no idea what they were. I called my mother asking what she thought the asparagus looking things could be. She didn't know, so she loaned me her gardening encyclopedia. 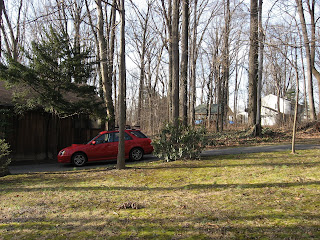 I miss my scoob. It was fast and red and fun to drive. 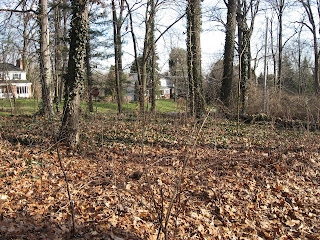 This is looking towards the front corner of our property - see all the leaves? I didn't even notice them. To this day I have no clue how I missed that rather large, prominent feature of the property. 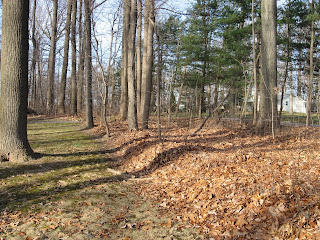 This one should have been a huge clue-in for me. The previous owners used to blow all of the leaves into this giant pile that ran down the front of the property from the street in about 20 feet. They also did this on the side of the property as well; while cleaning that one out, I found a nice flower bed with a rock border, mountain pinks and an azalea that had been completely buried in leaves for I don't even know how many years. There's another rock border under all of these leaves, that runs the entire length of the property. Cleaning all of this stuff out was like Christmas, we kept finding cool things hidden under ALL THOSE LEAVES.

We started the 'Great Clean-Up of 2007' in May. I think we (me, GeekBoy, mom - CrabbyC and dad - Tex) worked for a month before my mom made the executive decision that she would get a landscaper in to do some clearing of brush and leaves. It was a kind of a combination housewarming and 'Jesus Christ - this is going to take us forever at this rate' gift. Thanks Mom, you are the best.
In addition to the generosity (borne out of frustration) of my folks, we also are blessed with a neighbor who is a plant fanatic. His entire property is a sort of test-bed for greenies. He swipes seeds and samples while he's out walking his dogs, to his wife's abject horror, then plants them in these ringed plots in his backyard. If it weren't for him, we would have had a dirt farm in our front yard for at least a year. That first spring/summer he brought us 5-gallon buckets filled with Burning Bush, Black-Eyed Susans, Ferns, Purple Coneflower, mint, Rose of Sharon, and of course; several different kinds of hostas. I woke up one Saturday morning and there were all these buckets in little groups out in the front, along with a digging iron. He knew exactly what we were up against. We spent an entire weekend digging up rocks and planting everything that he brought us.
It's 2 years later and I'm just now ready to start sharing back with him some of my plants.
Next time I'll fast forward to this spring, and we'll start to see some progress....
Posted by The Hosta Chronicles at 8:12 PM

Labels: in the beginning