July 4th in the Cradle of Liberty - Part 2

Where did I leave off? Oh, right, the early afternoon on Friday.
So, Geekboy and I wandered down the road apiece and checked out Betsy Ross's House. It was freaking PACKED. 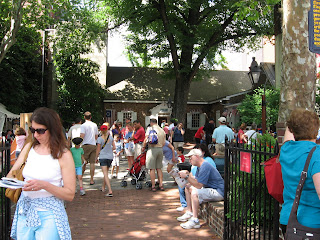 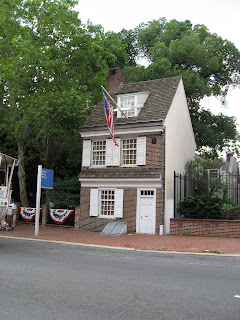 There was this very cute fountain (I think it was a fountain - it was turned off) with kittehs on it. The lady in pink clearly saw me trying to get a picture of it and plopped her rear right down anyway. (forgive me, I'm quite cranky and feisty today for some reason) 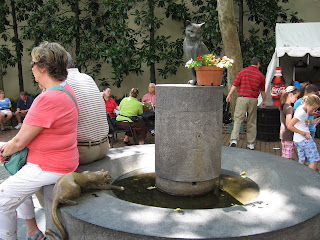 We only wandered in to the gift shoppe (hee) area of the house because, as a rule, I don't like people. This tends to work against me in situations like these because, come on, 4th of July in Philadelphia? - there are going to be a lot of people. Which leads me to tell you that, quite unexpectedly, we only had 2 run-ins with assholes (sorry Mom) the whole weekend. Well, if you don't count the meter maid that gave me a parking ticket on Sunday when we stopped for brunch, but I'm pretty sure there is a special place in Hell already set aside for meter maids.

Back to my digression. Going into the city I was armed for bear and expecting the worst that humanity had to offer. Because I am from Philly, I am not a tourist (well, technically) and I am not going to take any crap off of ANYONE. But really, I'm not a mean person. I don't want you to get the wrong idea. It's taken YEARS for me to get this sassy.

Both of our confrontations took place on Friday.

The first: Walking through Washington Square, towards the Tomb and Eternal Flame, an older man with an older beagle were walking towards us, both smiling. Because I am an animal person, I gravitate toward friendly looking dogs/cats/geese/rabbits/whatever. I walked over to the pooch and stuck my hand down (the owner was grinning away like he had a direct link to a nitrous oxide tank hidden in his shirt and did not say anything whatsoever to me) for the dog to have a sniff and maybe a butt-rubbie or head scratch. That little bastard just about ripped my face off. And the owner stood there LAUGHING at me. So I let the guy, and everyone else in the square, know exactly what I thought about him and his asshole dog in the best shrill 'Ennis' voice (my mom's family is known for their ability to cut through the loudest party chatter with their voices - seriously, when the 4 siblings get together it sounds like 40 people are in the room) that I could muster. And I continued shouting at him, as he and his little jerk-off with legs walked away.

The second: GeekBoy and I were stopped on the corner of 5th Street and Chestnut on the sidewalk by the Visitor Center on the Mall, waiting for the light to change. A douchebag (sorry again Mom) pushing a stroller and yammering away on his cell phone was crossing the street towards us from the other side and with no clue where he was going, pushed his stroller over GeekBoy's feet. The stroller, which was obviously not meant to go over feet, stopped. This guy never put the phone down, and started talking smack to my Geek about being in his way while continuing to chat. Oh no, I don't THINK SO. So GeekBoy (who has the amazing ability to make you feel like shit without ever raising his voice) started telling StrollerBoy where he could get off. But, since I was so full of piss and vinegar, and hell-bent on confrontation, you know that there was no way that I was going to sit by and say nothing. So over GeekBoy's quiet rant came the 'Ennis' voice - 'You know, if you bothered to watch where the **** you're going with that ***** thing instead of yapping away on that stupid ****** phone, you might realize that THERE ARE OTHER PEOPLE IN THE WORLD BESIDES YOURSELF, BUDDY!' He walked away a little bit and turned around to continue the 'conversation' with me. Good move on his part, I wouldn't want to be near me in that state, either. At that point, I figured that there were sights to see and stuff to do, so I left our new friend with the one finger salute and we were on our way.

Back to the fun and frivolity!

From Betsy's place we ambled on down to Elfreth's Alley, which happens to be the oldest continuously inhabited residential street in the country. 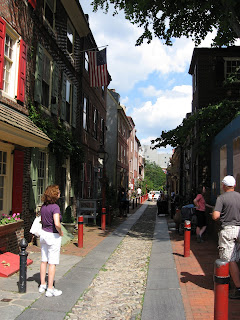 And in one of the side alley's off of Elfreth's, there were hostas! I can't get away from them no matter how hard I try. 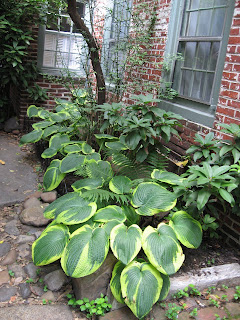 (I'm not really trying, though)

From the alley we cabbed it back to the hotel (oh, my aching feet!) to get dressed for dinner. GeekBoy and I were embarking on the 'Spirit of Philadelphia' for a dinner cruise. Hideously, horrifically touristy, yes, but the last time I'd done it was in 1988, when my graduating high school class chartered the boat for a night. I have little to no memory of it, as it was many years ago and there may have been alcohol involved (sorry, yet again, Mom). GeekBoy had never been, so really, it was a first for both of us. 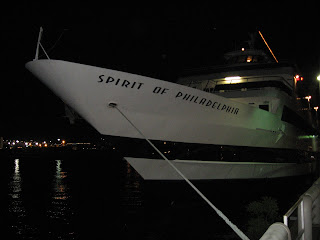 This is actually after we got back. I was too busy trying to look cool and gawking at the criminal fashion sense that some people have (don't get me wrong, I am NO fashion maven) when they go out in public, and I didn't take a picture of the boat before we disembarked.
Philadelphia from a distance. 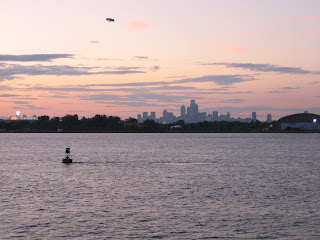 And a little closer up: 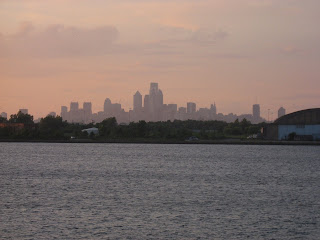 Isn't it pretty? I love Philadelphia, I really do.
Here we are! I'm not sure what the line shooting out of the side of my head is, but it seems to have gone away. 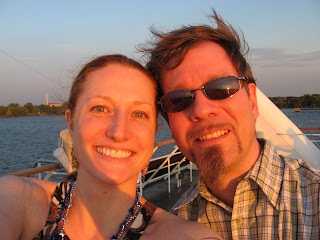 Eat our wake! Funny - there was this guy on a jet ski, all by himself, that was doing circles around our boat the whole time before we set sail and during the cruise. I should have gotten a picture of him. All I could think was; 'This? This is your big 4th of July plan? Ride around like a dipshit on your jet ski, BY YOURSELF, in the freaking Delaware River?'. Because I can be a dick like that. (sorry, for the rest of my life, Mom) 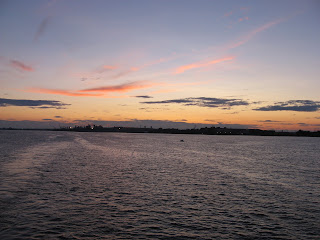 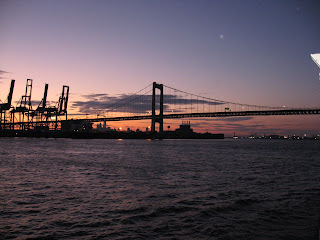 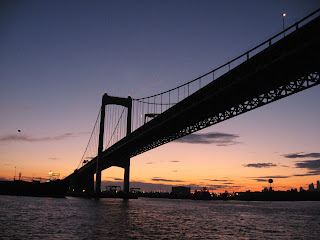 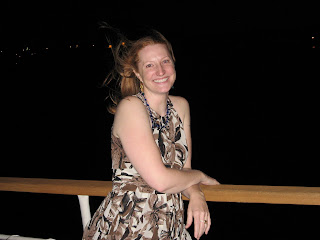 Clearly, I need to get working on those arms. Before they start to look like Easter hams.

All told, we had a great time on the Spirit. The food was so-so, but the ambiance more than made up for it. We drank, we danced, we sang.......really a lot of fun. I'd like to be out on it when they set off the fireworks off of Penn's Landing in late June - now that would be quite a show.

After the cruise, we walked back to our hotel (I have no idea why my feet were OK at this point) by way of South Street. South Street is nothing like it was when I was in high school and spent every Friday and Saturday night down there. It's much more commercial now, chain stores and such. It's also much safer now, though, there are lots of cops out and about, I especially like the mounted police - their horses are beautiful. It's in a relatively nice area that butts up to Society Hill and Antiques Row, as well as Penn's Landing. I didn't take any pictures, because my night shots seldom ever turn out.

I'm only up to Friday night, gah. This is going to be a three-parter.
Posted by The Hosta Chronicles at 1:26 PM