A few weeks ago I received an email from Mecca. Okay, not the real Mecca, but one of my personal Meccas, Bridgewood Gardens. They were going to be holding their very first Open House, ever. There was no way that I was going to miss that, so a week or so ago CrabbyC and I hopped in the trusty Focus and made the 3.5 hour drive down to Strasburg, VA to see what all the hubbub was about.
Bridgewood is a working mail-order nursery, they don't have a retail setup - so I wasn't quite sure what to expect. I've seen pictures of it online, but they had been taken a few years ago. I was really excited to visit their site and see where so many of my precious babies come from.
What a treat we were in for. It couldn't have been nicer. Some shots from our day.....
I loved the metal flying pig guarding the 'this way to park' sign: 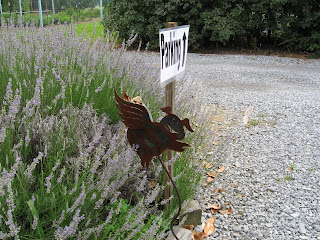 CrabbyC, refilling her nicotine tanks (behind her is Bridgewood's vegetable garden): 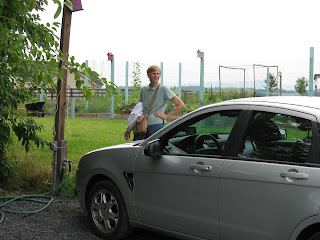 I want a building just like this so that I can decorate it and make it look all 'Pottery Barn' like. 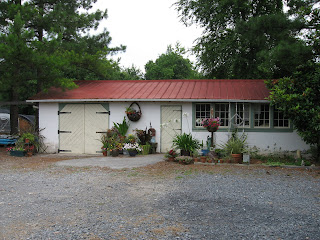 This is the packing house. That's Dave out front. He, along with Chick's wife, handle the perennial (other than Hostas) business. 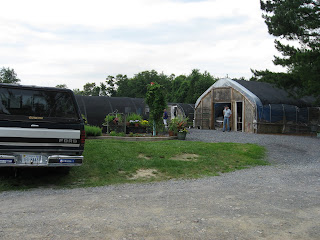 The hoop houses, with a view of the Shenandoah Mountains in the distance. What a beautiful view to wake up to every morning. 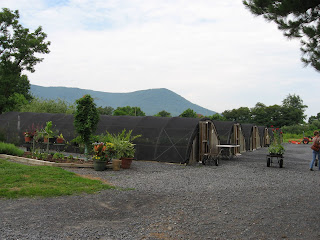 And what the hoop houses contain: 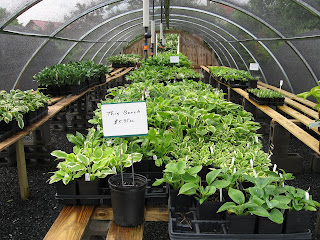 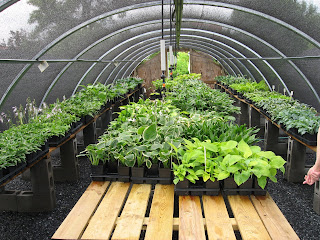 Hostas, hostas and STILL MORE HOSTAS. As far as my eyes could see. They were gorgeous. I wanted to take home one of every kind that I don't already have. However, the Focus could not contain them all. Neither can my budget.
They also had perennials for sale: 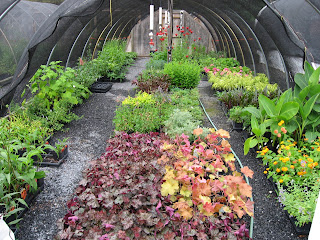 My 'cart' after about 5 minutes: 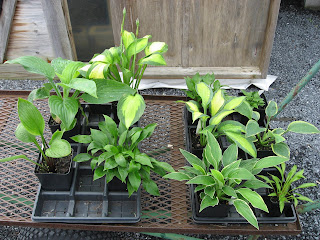 I got to meet Chick. To me, this was on par with meeting a rock star or a sports idol. 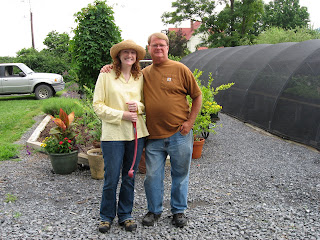 What a great guy. He's a Hosta Geek on a level that I can only ever aspire to be. It was so nice to talk to someone else who's every bit as obsessed as I am. It must be what those dweebie conventions are like - the Star Trek ones and ComicCon. Except that it was just us. And neither of us were in a silly costume. Unless you count my hat.
That thing in my hand is a Chuckit. It was necessary because of this one: 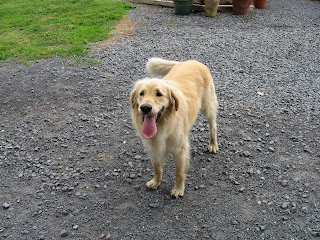 Isn't she pretty? Can't you see it in her eyes? 'THROW THE BALL', they seem to be pleading. I probably spent the better part of an hour hurling a tennis ball into one of the fields, trying to tire her out. It wasn't possible. I was warned though, by both Chick and his wife. But, it was fun, I got to run around and shop for hostas. No complaints here.
CrabbyC had a sit-down at the table while I was getting all hostageeky with Chick. Chick, his wife and Dave were SO great to us. They let us use their restroom (in their house) and offered us sodas and water and lemonade. I think they even had cookies! It was exactly like visiting a friend's house for the day. 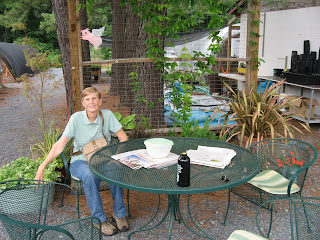 While CrabbyC sat and chatted, Chick took me over to his 'special place'. His test beds. One day, maybe, I'll be lucky enough to have a spot like this. They were impressive, to say the least. 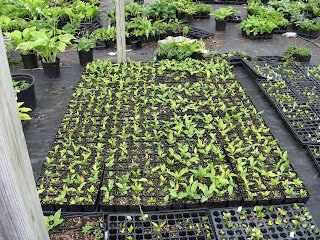 This area is where Chick does all of his 'playing'. In his own words, 'I sell Hostas, so I can grow them full-time'. I am so jealous, I'd love to be able to say that. According to him, he grows somewhere in the neighborhood of 1,000 (!) types of Hostas, but only offer several hundred through their catalog. 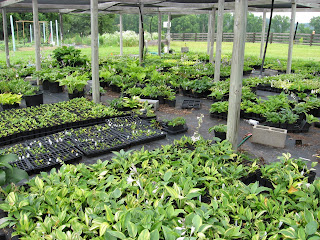 Chick was generous enough to give me a sneak-peak at a new hosta that he will be introducing in the next year or so: 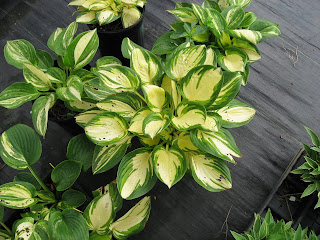 It's going to be called 'Simply Irresistable'. A beautiful plant; I love it, and I plan to be one of the first to acquire it once it's available.
We had a great time visiting Bridgewood and I am hoping that they will continue hosting Open Houses in the years to come. Their hospitality was wonderful, and I would definitely make the trip again. It was a nice drive down to Strasburg, and CrabbyC and I were able to stop in Frederick, MD on our way home. We visited with my old neighbors (I lived there in 2004), had a nice late lunch at the local brew pub, and I went nuts in the candy store.
On our way out, we noticed a sign that had, apparently, been put up by one of the neighbors. 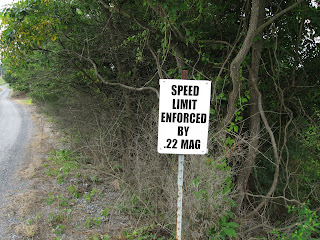 Much to (I'm sure) his complete and utter disappointment, everyone we saw seemed to be driving fairly responsibly.


So, if you have any interest in acquiring hostas (or ferns!) for your own garden, or know someone that does; please check out the selection at Bridgewood Gardens, you (or they) will not be disappointed.


Because I know you are DYING to see what I bought, I took a few shots of my acquisitions: 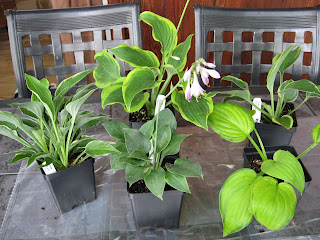 They are (clockwise from left): Carol, Satisfaction, Earth Angel, Guacamole and Blue Diamond. 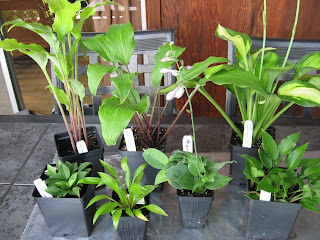 Then we have: (back row) Tequila Sunrise, Red October, Captain Kirk (for GeekBoy); and (front row) Rock Princess, longissima, Pearl Lake and Bubba. 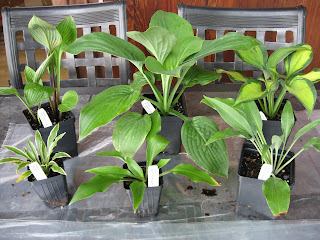 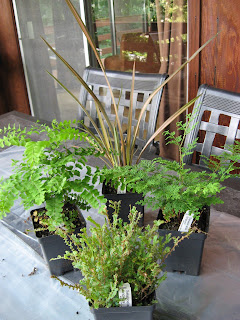 I didn't go all esoteric and only buy hostas on this trip. I also availed myself of some of the ferns and a grassy plant as well. 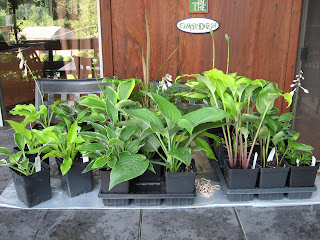 This is the table on our deck. As you can see, I still haven't planted the hostas I got from Bridgewood by mail a few weeks ago. I'm still waiting for my new hosta bed to be dug (um, Geekboy? How about it?). However, we are now looking at a terracing project on the side slope of our property, so I may hold off on planting until I see how it turns out - I might just want to plant the terraces with hostas. Then I can BUY MORE!

Posted by The Hosta Chronicles at 7:35 PM