Every once in a while, I get a hair up my ass and I'll go off and try something new. The aforementioned pottery classes, watercolor classes, crochet classes, make-your-own lip balm kits, you get the idea.

Thousands and thousands of years ago (ok - circa 1998), in a land far, far away (ok - Berkeley, kind of North Oakland/South Berkeley), I ordered a glycerin soapmaking kit from Martha Stewart. This was back when she still did that sort of stuff. Around the same time, I found a soap and candlemaking supply store on San Pablo Avenue, less than a mile from my house (ok - it wasn't 'my' house. I had half of a duplex. Jill, of Controlling my Chaos fame and her husband and their two cats had the other half. They didn't have the kidlets yet.). Can't remember what the store was called, but I thought I had found my new favorite pasttime.

The Martha soap was easy. Chop up some glycerin, microwave it, mix in some of the additives that came in the kit (scrubby grainy things, scents, colors), pour into vaseline greased molds, let sit a few hours and out pops soap! Soap you can actually use! I was a cottage industry!

Since the Martha kit was only for glycerin soap, and I was determined to make soap the old fashioned way as well, I purchased supplies to make a beeswax type soap (they gave me the instructions for free) using palm oil and lye and, of course, a giant block of beeswax.

I burned myself with the lye. That shit hurts. Making soap from scratch is a labor intensive pain in the ass. And hurty. And it takes freaking forever. And, if it's not done EXACTLY right (there is math involved - snore) it doesn't work, you don't get soap. You wind up with 4 pounds of beeswax scented, yellow sludgy mush that does nothing but sit there and jiggle when you shake the mold around, after having let it sit for a week or so curing. Like concrete. The first batch I made turned out ok, the second; well, let us just say that that's how I know what happens when you don't do it right.

I still have the block of beeswax, but I don't make 'pioneer days' type soap anymore. My need for instant gratification can't take it. So I am relegated to the world of glycerin soap - which is fine. I can still pump it up with all sorts of goodies that I find in my kitchen cabinets to keep it from being boring, and it's done relatively quickly, with little potential for injury.

When I was living in New Hampshire, in 2001 (I moved around a lot for a number of years), I stopped in at an indoor kind of rotating flea market slash antiques mart, and I found a set of antique metal Jell-o molds. Little ones, single serving-type Jell-o molds. I had an a-ha! moment. I could make Jell-o soaps! Clear, colored, glycerin soaps with fruity scents that would look and smell just like little Jell-o's, but they'd be for washing, not eating.

And so it was. A few times a year, I'd haul out my soapmaking supplies and in an afternoon, I would make enough soap to clean the Philadelphia Eagles for the entire NFL pre-season, regular season and post-season (if they are fortunate enough to make it that far). That's the thing, once you get the everything out, it's not worth it to only make 2 bars. Luckily, I have a couple of friends who will take some of it off my hands. Sometimes, they even come to me asking for it - which is nice.

Such was the case at the end of January.

I didn't take step by step pictures of the entire process, so you are getting just a few highlights.

Here we have some of the simple tools (aside from the nearly finished cup of coffee) for making the Jell-o soaps. I bought 6 molds, but three of them are in much better shape than the others, so I am relegated to making only 3 soaps at a time, all the same flavor. Pause, for you to admire my days-of-the-week dish towels. 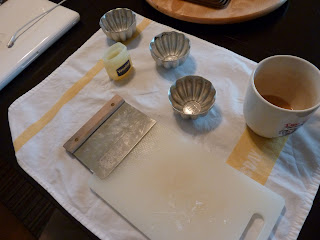 3 lime Jell-o soaps cooling on the counter. This day, I made strawberry, lemon, orange and lime. 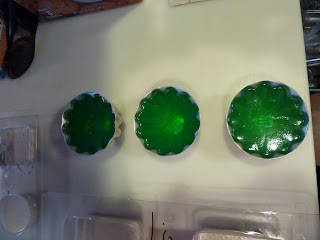 Some close-up shots of them, once they are popped out of the molds. The lighting is kind of sucky, because we have these stupid cabinets that hang over the bar counter and block any overhead light. 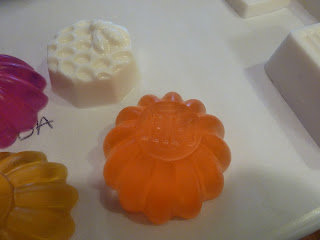 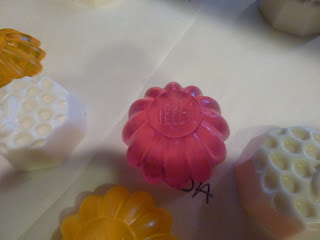 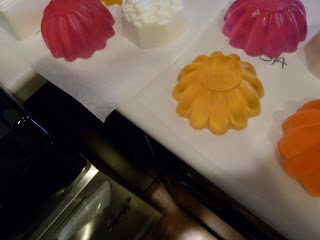 For the nummy-smelling soaps that I expect people would wash themselves with (rather than just their hands, which is what the Jell-o soaps are more suitable for), I use different glycerin bases that already have some emollient added to them. To them, I just add more. If a little works, a lot has to be better. I inherited that gene from my maternal grandfather. Ask CrabbyC about the time I burned up my front lawn with the Weed and Feed.

This is how the glycerin base comes. You could just cut a chunk off and wash with it, but where's the fun in that? 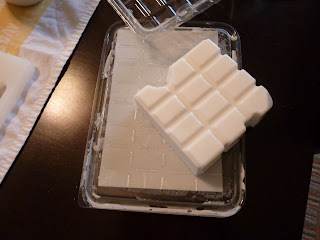 For one of my friends that has super-sensitive skin, I make unscented milk and honey bars. They're just one of the white bases (goats milk or shea butter), that I add cocoa butter, honey and powdered milk to. She swears that it takes away those little bumps that she gets on her arms and stuff - the dry skin bump things. Maybe you know about those.

You can see them below - on the bottom left. 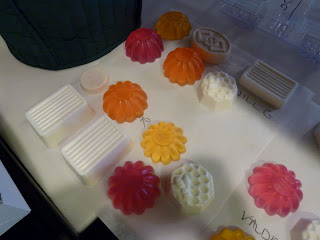 For the rest of the bars, I just throw in whatever I think will go together well. As the proprietor of dry-ish skin, I add copius amounts of moisturizing ingredients - cocoa butter, shea butter, powdered milk, a few shreds of the giant beeswax block. I'm a food-smells person (I understand there are flower-smells people and food-smells people), so I use a lot of stuff from my kitchen. Oatmeal is a favorite, as are cinnamon, vanilla, and honey. There's no rhyme or reason to it and I don't measure anything. I do, however, have to label them so I have a clue as to what's in each one. Going by smell doesn't always work. 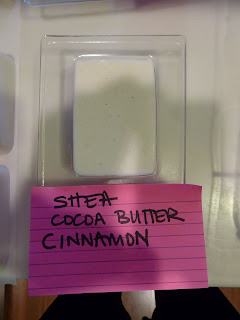 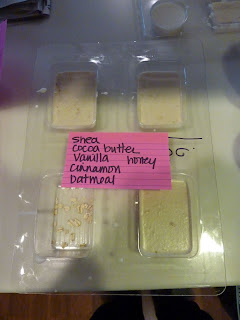 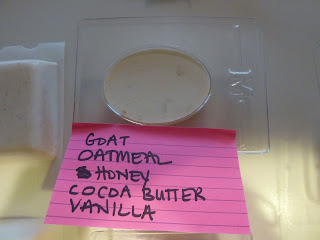 Here's most of the day's production sitting on the counter. 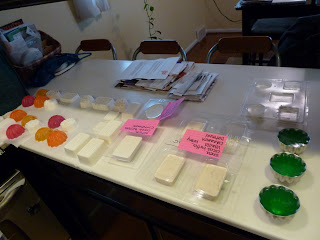 And another view of the Jell-o's and the honeycomb-with-bee shaped soaps. Of course I put honey in those bars. I think my OCD would spiral out of control if I didn't. 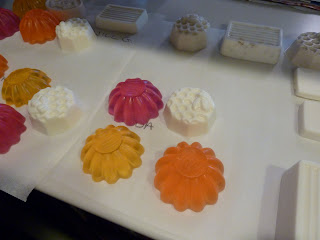 The soaps were sent off and so far, everyone seems to be enjoying them. I have long harbored a secret wish to open some kind of online store and sell themto the masses, I don't know, maybe one day I will.
And if I could get a contract to provide soap to the Eagles, that would be good too.
Posted by The Hosta Chronicles at 11:06 AM