Last week, I packed up CrabbyC in the somewhat trusty Focus and headed into our fair city for the annual Flower Show. We try to make it down every other year. While the exhibit itself is very beautiful, the Convention Center is overrun with old people, ambulatory and also in wheelchairs; and let me tell you - they will knock you down in order to get up close to things. This can make the experience a little less than enjoyable. However, in the last couple of years, the PHS has added a wine & spirits tasting hall to the attractions - woot! I am much more amenable to being run over by some old cooter's scooter (ha - I rhyme!) if I've got a few ounces of liquid patience percolating in my belly.

And so it was. Lots of pictures in this post, not much in the way of writing. The theme for this year's show was 'Passport to the World', so the individual exhibits were based on different countries; India, Holland, Ireland, Africa.....you get the idea. The lighting was not very good for taking pictures, but I did the best I could. (wah, wah, wah) 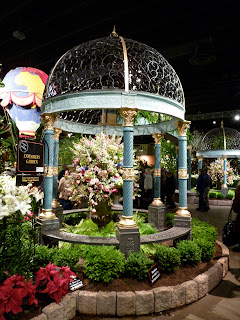 These two photos were taken at the entrance to the Show. 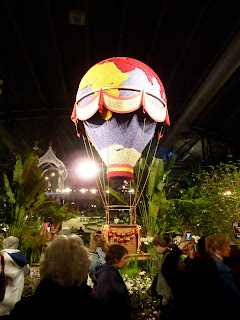 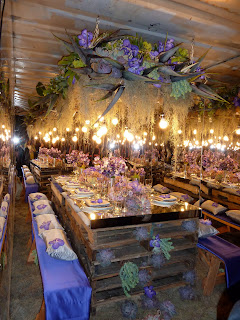 Some of the exhibits were more artistic in nature, not necessarily things that you could recreate at home, but really imaginative and quite beautiful. 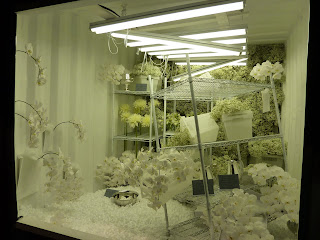 I liked this next one - the plants were encased in 'ice' blocks and suspended from the thing above them, and there was water dripping down from the 'thing' (yes, again having trouble with my words) into the pool below. 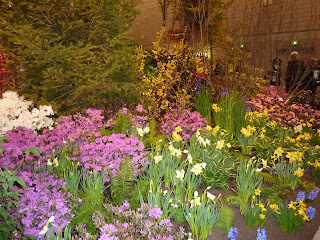 I am always on the lookout for Hostas, and wasn't disappointed. 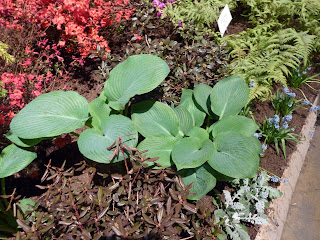 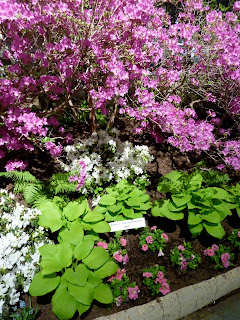 I don't know how they get the azaleas and rhodies to bloom in March - I'm guessing they force them in a greenhouse - mine never look this good. 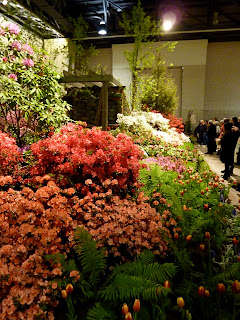 This next one was called 'The Glass House'. The exhibitor created a giant American flag out of flowers and then entwined all sorts of American 'artifacts' into it. There were Coke cans and pictures of Marilyn Monroe and Elvis, baseballs - if it's patently American, it was in there. 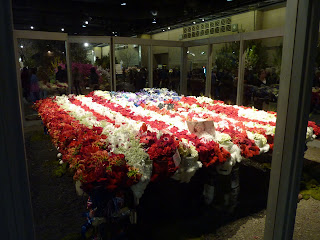 I especially like the exhibits that are woodland-themed. It gives me ideas for stuff to try (and fail at) at our house. 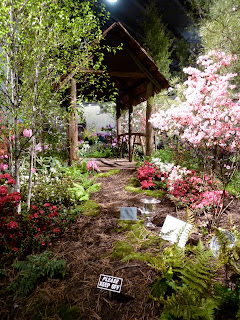 This next guy was cool. The theme for this was 'Route 1 - Maine to Florida'. 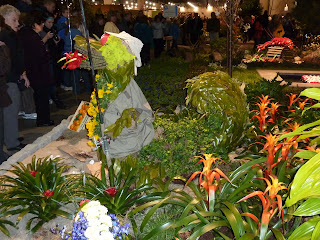 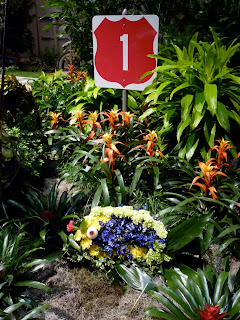 The bulbs they had on display were amazing. 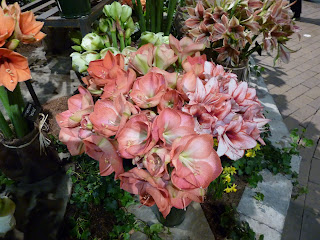 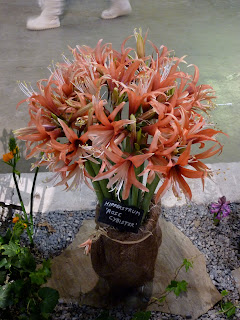 Oh - this next exhibit - I have got to have this one. It was an open air bedroom. So very neat. 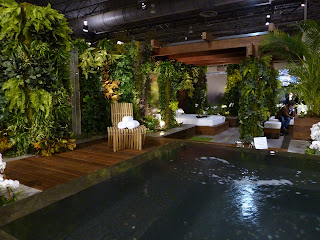 I had a hard time photographing it. The next two pictures are of the same thing, but one with the flash on and the other with it off. You can figure out which one you like better. 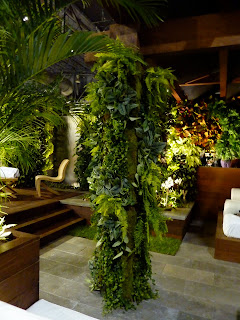 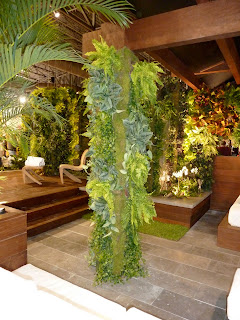 Here's another shot of the whole thing. 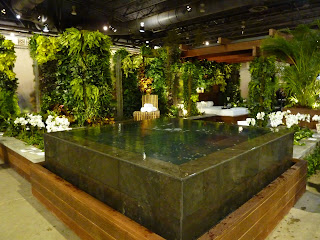 One of the exhibitors created an Amsterdam canal, and filled it with bikes and bottles and stuff. 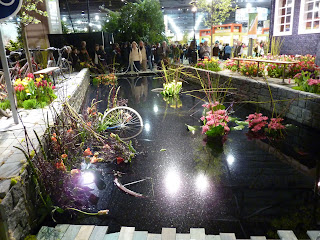 Here's CrabbyC and I in the booze arena. 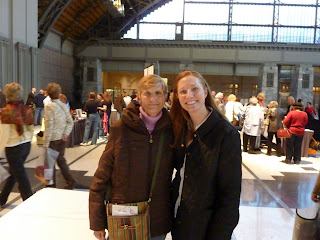 This is an elephant. (no shit Deb) 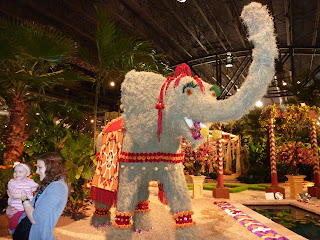 In the India exhibit - they created an Indian wedding temple-thing, with these cool flower starbursts in the front of it. 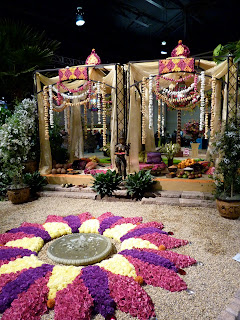 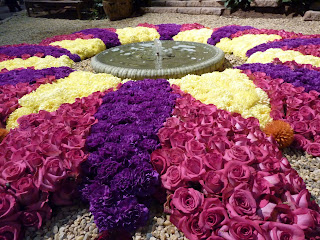 There are a lot of smaller exhibitors as well, not everything is on such a grand scale. Each year, the PHS will pick a theme or medium for them. For this project, everyone had to do something with a Brazilnut. 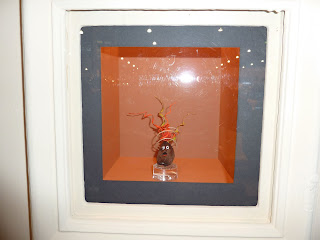 I liked these geese a lot. 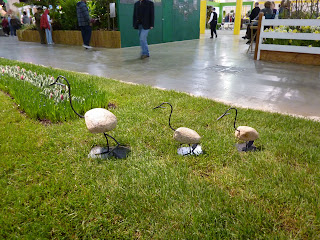 The miniatures are absolutely adorable. 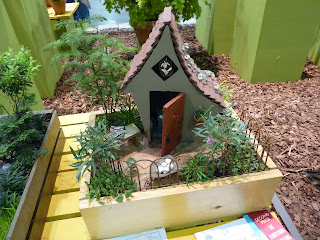 This plant was so neat looking. There was a group of about 5 of us standing around it and we all were itching to touch it - which is a big 'no-no', but we did it anyway. It was fuzzy, but firm feeling. And it lived through the abuse. 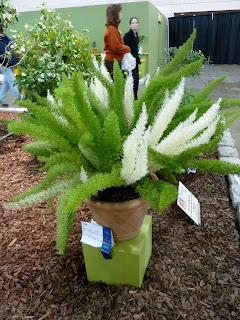 This year was a little light on the Hosta entries for the individual entries. Kind of a bummer, but at least there were a few there. 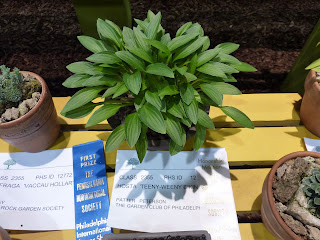 Teeny-Weeny Bikini! (the blue ribbon is for his neighbor, unfortunately) Boo hiss. 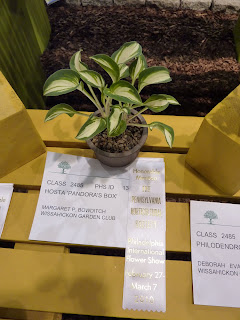 Pandora's Box. I have this one in my own garden, last year it got eaten. This year, it will not. 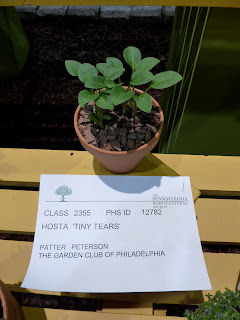 Tiny Tears. LOOK AT IT. It's so tiny!
That's it for the photo show.
I love the Flower Show, in that it gets me all excited to start working outside.
I hate the Flower Show because I know I can't even get close to what they do and it makes me want to go home and burn my house down.
Posted by The Hosta Chronicles at 1:45 PM