On the third day after Christmas...

my GeekBoy gave to me: 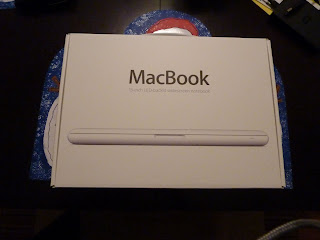 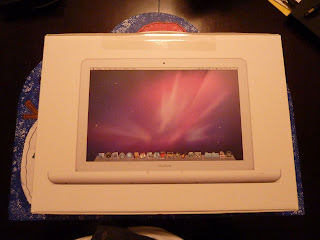 This was after he presented me with a Lenovo NetBook on Christmas Eve. (squee!)

See - my antique G4 iBook had a full (60GB - teeny tiny in this day and age!) hard drive, and couldn't run the Snow Leopard upgrade that he also gave to me for Christmas. The 'black box' (also a Christmas gift) would take some of the load off of the hard drive, but without an upgrade to the OS, I would be stuck practically in the 20th century. And there were no more slots to add faster running hamsters.

I love having my very own live-in Geek Squad (so does CrabbyC).

Macs are pretty easy to use - just open the box and turn it on. The new one had an option to transfer everything from your old Mac to your shiny new one - how convenient. 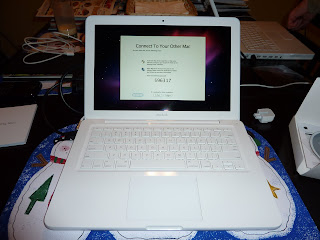 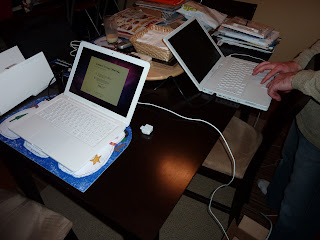 We didn't tether them together - they were talking to each other over our wireless network. I don't know if you can see what the it says below the happy Macs, I can't remember exactly, but it's something like 13 hours remaining on the transfer. GeekBoy says if we had tethered them together it would have been a lot shorter. Um, so why didn't we? 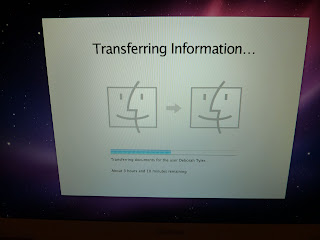 So, 8 days later, my new Mac was up and running - boy is it NICE. GeekBoy inherited my old one and he's been busy tricking it out and showing me all of the things it can do that I never took advantage of.

Whatever. I just got 2 new computers in the span of a week!

Just what he needed was another computer. He still has the one that went to college with him - back in 1987. Someone recently asked him how many computers he had and what was his answer?

We are an Apple/PC family; my work machine and the netbook are Windows-based machines, but I also use a Mac. I can't say that I prefer one to the other - I think Apple has an edge over Microsoft in terms of out-of-the-box useability, but Windows applications/software are MUCH easier to find and are less expensive.

What about you? Apple or Microsoft? And why?


Posted by The Hosta Chronicles at 3:59 PM