NC and the Terrace Project

Q. and I met in '97-'98 when I up and moved across the country to SF. We worked together at the Evil Empire (it's so funny that many people refer to their workplaces, usually former workplaces, by this name) in the Financial District. She left their employ before I did, but we've stayed in touch ever since. Q. was definitely the best part about that place, at least as far as I am concerned. I moved back east at the end of '99, but have visited the left coast as much as possible since returning to PA. (I'm still determined to move back out there someday) Anyway, she and M. up and moved across the country to the east coast just about a year ago. So now we get to be in the same time zone and only a one hour flight away from each other!

A good time was had by all this weekend. There was much chatting, drinking, eating and some African drumming and dance thrown in. Next we work on getting them up to our neck of the woods for a visit.

Now, back to the hostas!

I know I've been a little light on the plants lately. Thing is, around this time of the season, when it starts to get a little cooler out and the greenies start to get kind of sad looking; I get the shits of working outside. It's just a matter of weeks until the leaves start to fall and then the really hard work starts. Picking them all up and moving them out to the street for removal, lather, rinse, repeat. For 2 months straight. Autumn is my absolute most favorite time of year, and I love being outside when it's passing through, so I guess the leaves give me an excuse to spend lots of time enjoying the season. Can you tell I'm trying hard to make a negative into a positive? Go me.
In 2007, GeekBoy and I puchased a house on what could be called a 'difficult' piece of property. It's wooded and slope-y and clay soil and wasn't very well maintained (the landscape, not the house part) by the previous owners. We've managed to clean up a fair amount of it and we are always making improvements where we can.

One such challenging section was the slope leading down to the side yard. It's covered in ivy and pachysandra and part of it looked like someone had, at some point, tossed a bunch of railroad timbers down it and just left them there to rot. The plants had grown over most of them, but the ends were sticking out in a few places. We were worried about a possible erosion problem and it just wasn't very nice to look at - not that we see it - but a lot of people walk around our neighborhood and it was kind of an eyesore for them. In addition to that fun, the lawn in the side yard (ha! I use the word 'lawn' when I really mean 'weed patch') was looking a little beat, and there was a clear line of demarcation where our yard ended and the neighbor's lush, green grass began. The previous owners had had some trees removed and the stumps ground out, so we had a pile of sawdust and some big divot-holes and uneven patches, it was always hard for GeekBoy to mow the weeds.

We decided to get some terraces built into the slope to control any erosion and to clean the view up a bit and also to have the ground in front of them graded and grass seed put down, so it looked a little less like suppose nobody cared about it.

An aside; the words in italics are a saying of my mother's, from when I was a little kid. 'If I let you go out in THAT people are going to think that 'suppose nobody cared' about you.' I have no children and no plans for them, and still, I find myself repeating the things my mom said to me when I was young.

Here's the offending spot as viewed from our driveway: 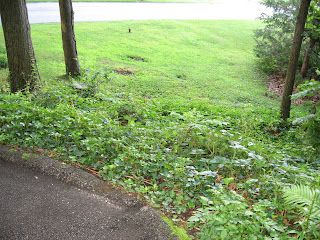 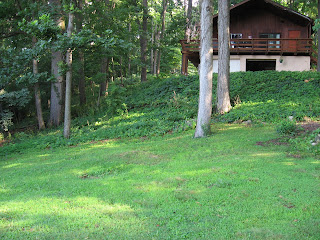 It looks shitty. I know it. You can say it. I won't be hurt.

I made GeekBoy take pictures of the workers in action: 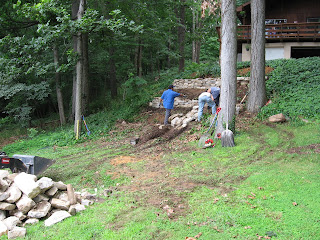 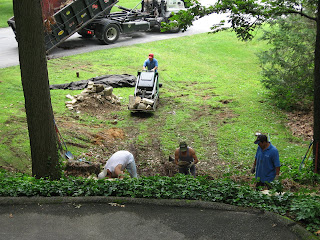 It's a good thing that we were getting the yard graded and seeded as well - they made an absolute mess of it with the rocks and equipment. 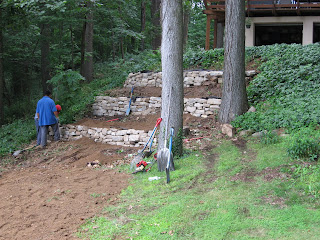 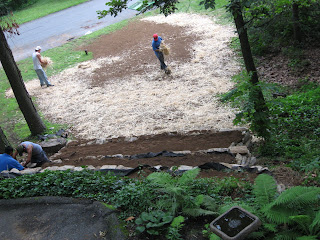 Here's how it looked when they finished: 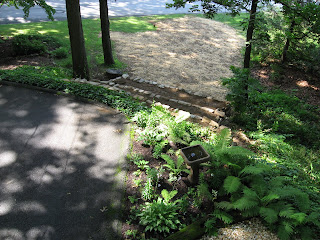 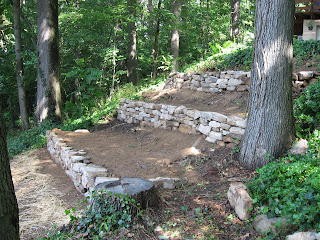 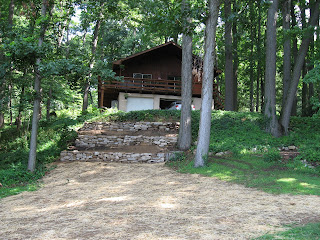 Better. Now the terraces just need some plants to fill them.

Oh hey! There's my little red wagon! It was a Christmas gift from GeekBoy last year. I truck all over our property with it filled with plants and soil amendments and tools. It's so much nicer than hand carrying everything and making 5 trips. 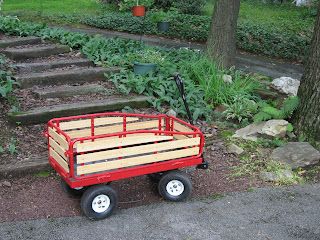 Remember all those plants on my deck table? That's all of them down there. Waiting for holes to be dug. Plus more that I bought later. I was a little worried that I didn't have enough to properly fill the terrace beds. 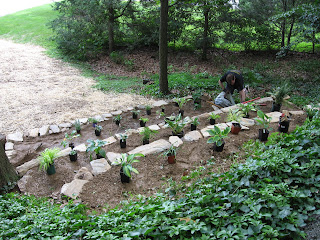 You can see GeekBoy putting in some rock steps to make it easier to access the terraces. That was something that we didn't think about, and didn't ask for when we booked the job. 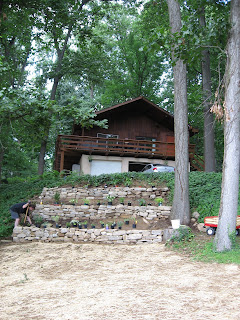 Here we are in the midst of my planting. It took me all day to plant the 3 terraces. I started at the top and made my way down. It was a long day. Then we mulched everything and watered it and the grass seed. And continued watering the grass seed, hoping that some of it would catch on and grow. 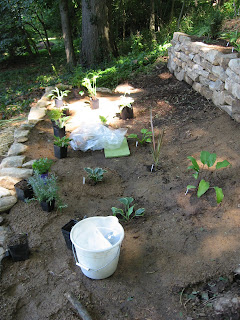 And here it is a month and a half later: 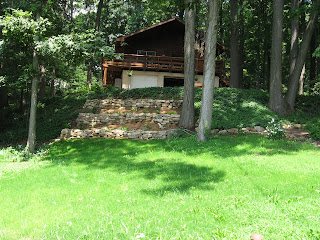 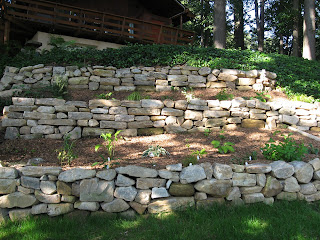 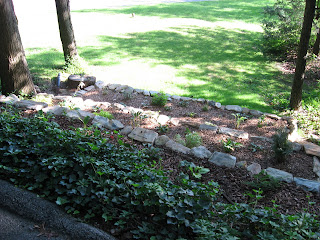 Way better. Can't wait to see how everything comes in next year.

Posted by The Hosta Chronicles at 2:30 PM